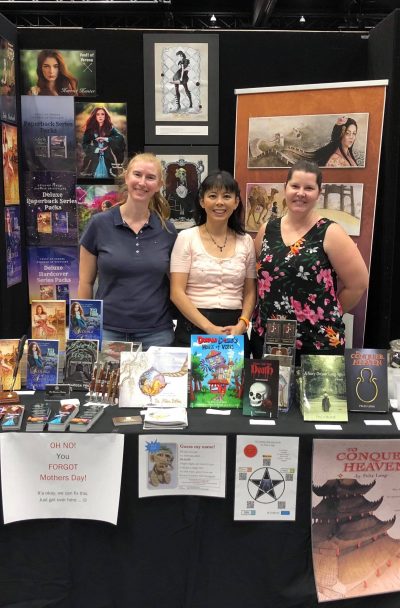 How the self-publishing industry has changed Newsletter features

Excerpt: ‘So You Want to be a Writer’ Newsletter features

While most marketing and promotional strategies are directed online these days, fan conventions can offer self-published authors a way to meet and sell directly to potential readers and add a ‘personal touch’ to their message.

Authors Marianna Shek, Marissa Price and Felix Long shared a stall at the Gold Coast Supanova Comic-Con & Gaming Expo, that ran from 27-29 April earlier this year. They spoke with Australian Self-Publisher about the experience.

How it all began

Marianna Shek, author of fairytale picture book The Stolen Button, had previously run a number of market stalls and decided to reach out to other authors interested in sharing a stall at the Supanova convention. She posted a call-out in an online Facebook group, and two other authors signed up: Marissa Price, author of Into the Abyss, and To Conquer Heaven’s Felix Long.

The Supanova convention describes itself as ‘a place where fans inspired by imaginary worlds emanating from comics, sci-fi, fantasy, anime, gaming, nostalgia and literature have been able to come together to celebrate’. But for Price, the experience of going to a convention was a new one: ‘I had no idea what Supanova was, but I was willing to give it a go,’ she said. ‘I got my first real taste of what I was in for when we checked into our hotel and saw a group of people in costumes!’

Shek, who has sold her titles at libraries, brick-and-mortar bookstores, markets and online, said she always thought ‘there was marketplace potential for fantasy/science-fiction writers at pop-culture conventions’. Her work in animation led her to realise the potential of reaching like-minded audiences at these gatherings. ‘I have a lot of friends and former students who end up working in illustration and/or comic books. I could see they were doing extremely well at places like Supanova and Comic-Con, and I thought comics are not so different from novels. It was an easy decision to try it for myself.’

Price’s titles are available at several online retailers such as Fishpond, Booktopia, Amazon, Angus and Robertson and QBD, as well as on her own imprint’s website, The Literature Factory. She said she was drawn to the idea of selling at the convention because it was a new idea she had never considered before. ‘I wanted to have a new experience, and to try something outside of my comfort zone. I’m not a seller by nature—at least not of my books and myself! It’s been my Achilles heel in self-publishing,’ said Price.

Long’s books are also available at several online retailers such as Amazon, Kobo, iBooks, Barnes & Noble and Google Play. She has come up with a unique way to generate extra income from her ebooks via a ‘Digital Honesty Box’: a means to take payment from within the ebook (which she explains further in her Q&A in this issue). Long said her main objectives at Supernova were to sell enough books to cover the cost of the table, to observe the strategies used by other authors at conventions, and to assess if the Supernova attendees are her target market.

Shek was surprised by the level of interest in her stories and learned that convention attendees don’t care if the stories are self-published or traditionally published. ‘People would come up to my stall because they were drawn to the cover art and were really enthusiastic when I pitched the premise,’ she said. ‘I could tell straight away if they were engaged with my story and if I would make a sale. If they were not interested, I would ask them what genre they liked and pass them on to Felix or Marissa if their tastes matched their books’.

Shek also noted that one customer said that they found it annoying if they could not find book sequels easily, for example at regular bookstores. ‘It gave me room to pause because so many self-published authors wouldn’t be regularly distributed through those channels.’

It’s another distribution strategy, but make sure your books suit the audience

Fan conventions are an overlooked distribution strategy, but work best for fantasy, science-fiction or speculative fiction. ‘I had more success at my first convention than at arts-and-crafts markets and book signings in terms of financial return and, in audience engagement,’ said Shek.

It helps you grow as a publisher

For Price, one of the benefits of selling at the convention was personal growth. ‘I had no real expectations of Supanova, and it more than delivered,’ she said. ‘The costumes were amazing, the confidence of the people wearing them was inspiring and the creativity blew me away. I was out of my comfort zone, but many others made me feel comfortable and welcomed simply by being themselves.

Long felt conventions might be more viable as a sales avenue for mid-career authors with two or more books, and advised writers do their research. ‘If you are a debut author you will struggle against a fair bit of competition,’ she said. ‘Go along to Supanova and see what works and what is not really worth your investment.’

All three authors said, ultimately, the event was a rewarding and fun one. ‘There is a certain joy in finding your tribe. And in finding that they are a glorious technicolour spectrum, from closeted introverts hiding under a Nazgul cowl to gorgeous spandex-clad sex-bomb Gold Coast gals getting their badass on,’ said Long.

Shek also emphasised the pure enjoyment of making connections with people who love the same stories as you: ‘I don’t necessarily mean my stories, I mean it was fun to be able to nerd out about animation and favourite tv shows and games,’ she said.

Price encouraged all authors who’ve ever thought about it, to just do it. ‘You never really know what will work and what will not, as there are so many variables to consider. The nature of the author and publisher, the type of work and the connection with the audience are all very valid matters to think about, but aside from selling books, it’s an awful lot of fun!’

Tips from the authors

For more information about each author’s self-publishing journey, see our Q&As below or click here.