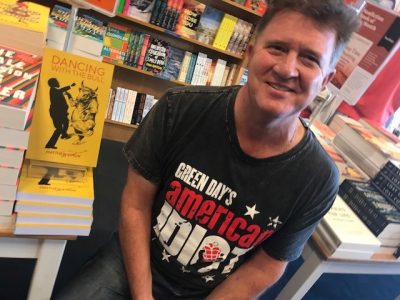 Matt Simon on ‘Dancing with the Bull’

Matt Simon spent 25 years in senior executive roles for multinational companies like J P Morgan, Standard Chartered Bank, Merrill Lynch and NAB—but one day, he realised he’d had enough. This month, he spoke with Australian Self-Publisher about self-publishing his first book, Dancing with the Bull, which draws on his experience in the corporate world.

Describe your book in under 50 words

Dancing with the Bull—the corporate odyssey of Luke Glass, a reluctant journeyman. A humorous yet thought-provoking tale exploring the ‘busyness’ and downright absurdities of modern corporate life, the eclectic mix of complex characters it breeds, troublesome dogs, and the choices we make along the way.

I very much appreciate and understand that none of it was personal, but after a long and protracted period of receiving rejection slips, rejection emails, and in some cases silence from a long list of literary agents and a few carefully selected publishers, I finally took the hint, reworked the manuscript (taking heed of suggestions made) and decided that the only way I was going to see Dancing with the Bull in print was to do it myself … And I am so glad I did.

Dancing with the Bull commenced its journey in Melbourne in August 2011, and came to print in November 2017, with a reprint in December 2018 (and here I thought that it would only take about two years to write a book).

As a first-time author, without a doubt the best thing I did was to engage a mentor/editor, as well as a sage counsellor, to accompany me on the bumpy ride as I wrote Dancing with the Bull. Every two weeks I would pack up my manuscript and discuss all I had written—the good, the bad and the ugly—then go home and write some more. For me, writing a novel was as much about learning about myself, as the book. Sharing that experience with someone along the way was invaluable.

Many others assisted on Dancing with the Bull, including beta readers, copy editors and those who have successfully been through the process and could offer sound advice. However, where I was most fortunate was having an expert ‘technical advisor’ (Michael Bannenberg) who not only designed the cover and typeset the book but also organised and arranged the printing for both the initial release and the reprint.

Dancing with the Bull has many colourful characters, but aside from the protagonist, Luke Glass, and the troublesome dogs, Belle and Frankie, only one other character has an actual name. Instead, labels are used. These become most apparent in the workplace, where Luke comes across an array of work colleagues and senior managers including the Busy People, the Extremely Busy people, the Extremely Busiest of the Extremely Busy People, and the Jackal, to name a few. In addition, the gender of characters is recognised sparingly, the result of which gives rise to some interesting reader observations through a lens of unconscious bias.

Seeing Dancing with the Bull come to life and being asked to speak about it as an author. For someone looking to change direction in life, this has been the biggest thrill.

A wise person once told me that a book is never finished; it merely stops. Stopping all the tinkering and reworking with Dancing with the Bull was a much harder task than I originally anticipated; almost as challenging as distribution and promotion.

What would be your top tip for those starting in self-publishing?

An excellent question, and one that I once responded to by saying: ‘I don’t have any advice, you’re on your own, work it out for yourself.’ But seriously it may sound cliché, but passion and continued belief in your project are paramount. If you are like me, you are going to get lost and have a bad day or two, possibly three. Don’t worry, it’s all part of the territory.

In the back of my mind I have a title, ‘Dancing with Helena’, a novel exploring one family’s evolving relationship with money, power and influence as it moves from generation to generation.