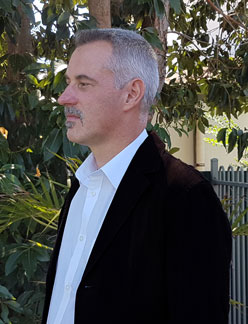 This month, author Drew Turney spoke with Australian Self-Publisher about Falling—a ‘sweeping adventure of the paranormal in the technology age’ that’s 25 years in the making.

Describe your book in under 50 words.

Falling is a grand horror story set five minutes in the future when an iconic bridge shudders and collapses, taking over 600 souls with it. Nobody is prepared for the maelstrom of supernatural terror that emerges years later, but it appears to have an unspeakable goal it can only reach by scaring you … And it knows what scares you.

The short answer—owing to the response I got the few times I tried—is that it’s not something any of the major publishing houses want to publish.

But the longer answer is that book publishing (along with most other media like newspapers and magazines) is in a state of collapse. A few blockbuster names get the lion’s share of attention and resources from publishers and fewer small titles get a look in.

The story of how one of Australia’s biggest fiction authors, Matthew Reilly, became so successful is publishing industry lore. He wrote, designed and printed his own books and sold them to bookshops in the northern suburbs of his native Sydney. An editor from Pan Macmillan saw one, bought it, offered him a contract and the rest is history.

I resolved to do the same—never mind that printing a book in quantities needed to adequately distribute it would cost more money than I’d probably ever have spare. I figured I’d cross that bridge when I came to it.

Meanwhile Amazon, the iPad and ebooks happened. Those of us increasingly shut out of the big publishers now have the means to go it alone. It’s now a cliché that publishing your thoughts and releasing them to the world has never been easier—we’ve all got blogs, after all.

The challenge now is to cut through the white noise, and when everyone can publish a book with a few mouse clicks, there’s even more for readers to choose from than when the book publishers had the market to themselves.

I started writing Falling in 1991 while living in my native Sydney. Since then I’ve lived in the West Midlands in the UK, Los Angeles, USA, and Perth, WA.

I wrote the novel, designed and built the website, designed the cover, media kit and all the other marketing assets. The only parts I contracted to other providers was the digital artwork to create the New Sydney Harbour Bridge as it would appear in the novel in the year 2037.

Most horror stories are about just that—scares—and for their own sake without any real reason except to scare the characters (and the reader). I wanted the site of a large and very visible haunting to prompt characters with a vested interested to figure out why it was happening, which the technology of the year 2037 and at least one of the characters possessed.

Getting to this point in the project. Multiple drafts of a 260,000 epic over decades, all under my own steam and in non-work hours as I had bills to pay and mouths to feed while I was doing it.

Finding the time to complete such an undertaking while having bills to pay and mouths to feed while I did so.

Invest in the interface between your project and your public/readers. People can smell a book that looks put together with spit and polish a mile away, and they tend to avoid it no matter how brilliant your story is. Look at least as professional and slick as the corporate publishers with a decent cover design, website, all the elements the media expects (a media kit with usable imagery, etc).

My next project is to write a screenplay about the biggest natural cataclysm in recorded human history.