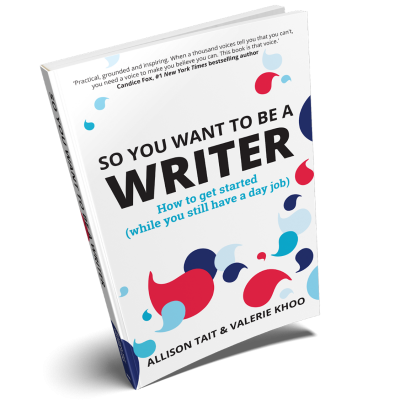 How the self-publishing industry has changed Newsletter features

Excerpt: ‘So You Want to be a Writer’

In June, the Australian Writers’ Centre (AWC) published So You Want to be a Writer, by AWC CEO Valerie Khoo and bestselling author Allison Tait. Sharing the name of the podcast Khoo and Tait have hosted since 2014, the book is aimed at the growing number of people who want to transition into a career in writing, and answers the many questions the pair receive from people interested in the world of writing. Below, the authors share their tips on sparking creativity.

Embrace your tired self and five ways to spark your creativity:

Creativity is a strange and wondrous beast, liable to drop in on us when we least expect it. Or at least that’s what a 2011 study by Mareike Wieth and Rose Zachs published in the journal Thinking & Reasoning confirmed.

The study was titled ‘Time of day effects on problem solving: When the non-optimal is optimal’. It found that tasks involving creativity might ‘benefit from a non-optimal time of day’ with regards to our circadian rhythms.

What does this mean? It suggests that innovation and creativity are at their peak when we’re not at our best.

Basically, we’re at our most creative when we are tired. If you identify as a ‘morning person’, those early hours are great for analytical and logical problem-solving. However, your most creative and innovative solutions might be found in the evening—and vice versa for the night owls among us.

When she’s creating artworks, Valerie works a lot at night. During the day, she’s a logical analytical powerhouse in her role as CEO of the Australian Writers’ Centre. By night, she channels her energy into writing and her artwork. She often works in the wee morning hours, when the creative side of her brain well and truly takes over.

Allison is a night owl (though not as late, she admits, as she used to be). When her children were young, daytime hours were for family business and her freelance writing—the paid work. Nights were for writing the things she wanted to write.

These days, she uses the mornings for creative thinking, plotting and planning in her head while walking the dog, before returning to her desk to write and manage the day-to-day tasks of her business (every published author is a small business). Afternoons are for family business, late evenings are for social media and organising the next day.

The main takeaway from this? Write even though you’re tired. Even though you think you’ll end up writing absolute drivel, what you end up with might be more creative than you imagine.

Five ways to spark your creativity

1. Allow yourself to be bored

We talked about this a little bit in the chapter on making time to write, but it’s worth repeating here, where is really counts. When you’re constantly stimulated by other people’s outputs—words, pictures, thoughts, opinions—you’re not leaving enough room in your brain to conjure your own.

Leave space in your day for the dreaming, the thinking, the drifting. When we’re left to do our own thing for even two minutes these days, our first impulse is to pick up a device. Don’t do it.

Sit with that uncomfortable feeling of having nothing to do. Observe what’s going on around you. Allow your mind to drift to a story you’re working on or an idea you’ve had.

2. Give yourself a reason to write

When Allison goes to schools to talk to kids about writing, she tells them there are two reasons why she loves writing. The first is that when you write, you control the world. Nothing happens in your story that you don’t want to happen. Yes, people talk about characters taking over, but where do those characters come from? That’s right, they come from you.

Even as adults, this notion of ‘control the universe’ is attractive. If you can control nothing else in your day—and, let’s face it, who controls every single thing that happens to them?—you can control what happens on that page.

Remember this when you’ve had a bad day and you’re tired and over it. Go to your work in progress and take back control.

3. Give yourself tools to write

You don’t know what you don’t know. Valerie uses this expression a lot—it’s the reason she founded the Australian Writers’ Centre in the first place. We’ve both been immersed in words our entire lives, but we still take courses, read books about writing, listen to podcasts and learn from others.

If you’re feeling tired and finding it hard to front up to your writing, blast away the cobwebs by taking a short course or even a seminar. You’ll not only learn new things, you’ll also draw energy and inspiration from your teacher and the other students—even in an online environment.

Writing can be a lonely task. The only person driving your project forward is you. Take a moment to learn a new way forward—and find some support along the way.

4. Take yourself on a creative date

No, really. See the earlier chapter on this!

5. Read a book outside of your usual taste

If you usually read nonfiction, pick up a book of poetry. If your taste runs to serious literary fiction, try a romance novel. If you like memoir, try a children’s novel. One of the most often-cited pieces of writing advice is just one word—read—and it’s true that if you’re writing children’s fiction, you need to read a lot of current children’s fiction to get an idea of what’s out there.

But if you really want to spark your creativity, read other things. Things you wouldn’t necessarily read. Because they show you a different way to think and to develop ideas.

When she’s writing her children’s adventure novels, Allison reads a lot of adult crime fiction. Why? Because the success of a crime novel rests on a strong connection between tight plot and character development. She doesn’t take notes as she reads, but Allison knows she’s absorbing and taking on board the story’s rhythm and beats. The structure.

Does it end up in her work? Not directly, but Allison will also tell you that, as a writer, she’s the sum total of the thousands and thousands of different books she’s read.

And you simply never know where the spark of an idea will come from.

Valerie Khoo is the CEO of the Australian Writers’ Centre (AWC), Australia’s leading centre for writing courses. Since 2005 the centre has taught over 45,000 students and has evolved into a hot-house for talented writers, who are regularly selected by major publishers for book deals.

Allison Tait is an internationally published, bestselling author of two epic, middle-grade adventure series: The Mapmaker Chronicles and The Ateban Cipher. She is a multi-genre writer, teacher and speaker with more than 25 years’ experience in magazines, newspapers and online publishing.

About So You Want To Be A Writer