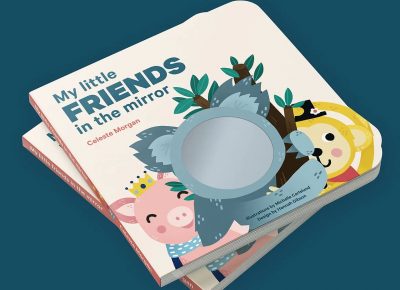 ‘Snapchat in book form’: Celeste Morgan on ‘My Little Friends in the Mirror’

Last month, Readings Kids manager Dani Solomon named Celeste Morgan’s My Little Friends in the Mirror as one of the store’s most popular self-published titles. The book, which began its life as a project on crowdfunding site Pozible, features a mirror on every page ‘to encourage play with their favourite friend—their own reflection!’ Morgan spoke to Australian Self Publisher about the idea behind the book, the crowdfunding campaign and how she managed the logistics of a tricky printing project.

Describe My Little Friends in the Mirror.

The idea for the book came when I noticed how absolutely obsessed my five-month-old son was with looking in the mirror. You could tell he actually thought there was another baby behind the mirror—so I thought it would be great if there was a book about baby’s ‘little friends in the mirror’. The book includes a fun animal character with a mirror face on each page—a series of little friends for baby to play with—before the final page reveals that that adorable baby in the mirror is actually the baby themselves. I think Hannah, the book designer, described it best when we first discussed the idea: ‘Oh, it’s like Snapchat in book form’. Ultimately, babies love looking at themselves, and this little book provides never-ending entertainment!

When I was creating the book, I did some research about what babies respond to at different ages. The book purposely targets different learning stages. For the first three to six months, it’s all about the mirrors themselves, helping babies learn about faces and gestures. The next six months are more about play and interaction, so each page includes a facial expression or action for parents to enjoy with baby—roar with the little lion, give the kitten a kiss, or snooze like the koala. Then for toddlers, the fun comes with the repetition in the story, the animal sounds and the role-playing.

What has the response to the book been from parents and booksellers?

The response has been so amazing! The crowdfunding campaign showed that people liked the concept, so that gave us a lot of confidence, but there was still so much that could go wrong in production, it was nerve-racking. We were so relieved when the shipment arrived and everything looked perfect. A few friends who received copies from their crowdfunding pledges actually commented how impressed they were that it looked like a real book. I think there is an impression that if you self-publish its going to look a bit like something you might produce for a school project!

The feedback from absolute strangers has been the most heartening. Some ‘fans’ of the book have stocked up on five copies at a time, ready to give them out as unique little gifts at the next baby shower.

We’ve had really great feedback from booksellers, too. It’s popular for babies aged 0–2 and also makes a great gift. It often takes a leap of faith for booksellers to stock an indie book, but all of our stockists have sold out within weeks and then reordered, so it’s been really heartening.

Here are a few snippets of feedback:

And of course the babies like it too! We are so glad they love it, and even more than we thought they would! We are always being sent pictures of bubs giving the mirror a big slobbery kiss or smiling at themselves. I’ve now got a second son who is four months old and it’s a joy to watch him smile and play with the mirrors. The real surprise is that older kids aged 2–4 also really like it. It’s really both a book and a toy so it has wide appeal.

Your Pozible campaign for the book exceeded its $11,850 target. Why did you decide to start the crowdfunding campaign?

I’d never done a campaign before, and I was only vaguely familiar with the concept. But as I looked more and more into the costs of printing a board book, it became clear that we needed some serious up-front capital. While print-on-demand is a cost-effective model for novels and paper-based picture books, board books are complex to print, and the printers required a minimum print run of 1000 books. Crowdfunding is really a low-risk pre-order system. It’s a way of testing appetite in the market and securing some up-front customers and it just made sense—though putting yourself out there and pitching for people’s support was completely terrifying!

With so many projects on Pozible and similar sites, what were some of the steps you took to make your project visible and ensure it reached its target audience?

It took a lot of preparation and hard work! I’d love to say we just posted it on the website and it grew organically, but we weren’t that lucky. We basically had to become very persistent and proactive with our marketing for a month, spending every spare hour getting in touch directly with friends and colleagues or developing content for social media. Thankfully, Pozible provided some really great tips on how to run a campaign. It was crucial to have a plan and follow it, and not let yourself get disheartened by the enormity of the target. I broke it down into smaller goals of around $200 a day to keep focus. Strategically, our focus was firstly on our immediate circle of friends and family, with the aim of building up a healthy base of 20–30% funding in the first few weeks. No one likes to back a loser, so its important to have some runs on the board before going public as such. We then gradually expanded the focus—asking friends to share and promote to their friends—then we utilised social media, mainly Instagram and Facebook, to reach out to the general public. We tried to make it as fun and playful as possible with lots of videos of babies dancing in the mirror!

We were lucky to actually get three wonderful booksellers (Coventry Bookstore, Treetop Toy Shop and Pickwick and Sprout) to jump on board and pre-order some books. That’s a fantastic thing to see in the industry, with bookstores willing to back a concept and an independent author from day one.

My Little Friends in the Mirror is a mirror book, which sounds like a production nightmare for a self-publisher to wrangle. Can you talk a little bit about how you managed the project from concept to reality?

It was definitely a long and eventful journey. Luckily the first step was easy. I love the work of Danish artist Michelle Carlslund, and I have some of her prints on our nursery wall. I was thinking I wanted illustrations in the same style and was wondering how to find an illustrator with a similar ‘look’. My partner suggested just trying my luck with asking Michelle, and thankfully she loved the concept and said yes!

Finding the right printer was a major challenge. Firstly, most printers we approached weren’t interested in a small print run that was as complex as this. Secondly, it was really difficult to find a printer that could access good mirror materials that had a decent reflection. I’d seen other books and toys with a mirror and most of them were terrible quality. We eventually found a printer who gave us a great sample mirror and was keen to work with us. However, once we were ready with the design, they informed us they were too busy to take on our order. Back to square one. We ordered a sample from another printer and it was awful, we nearly cried when it arrived in the post, thinking we had wasted everyone’s money. We went back to the original printer and grovelled and luckily, they took us on. But after this delay and a few unanticipated interruptions like Chinese New Year, we were a few months late on the intended Christmas delivery date for our supporters, but it was worth the wait.

What would be your top tips for those starting out in self-publishing—what lessons have your learned from publishing My Little Friends in the Mirror?

I’d love to publish another book for babies, as they really seem like a neglected audience in the book world. Board books are expensive to produce, but they are (somewhat strangely) priced very cheaply based on a perception of the reluctance of the market to pay for baby books. However, I think there’s a real demand for good-quality baby books, and with good reason. Parents love the opportunity to share a book with their bub, and if the book is playful, interactive and good for baby’s development—all the better.

I’d also love to publish for older kids. In my day job, I work in the environmental sector, so I’m using that knowledge to create a series of stories that connect kids with the natural world in a playful way. It’s so important that we talk about climate change with kids—not in a way that causes fear or sorrow, but in a way that inspires.