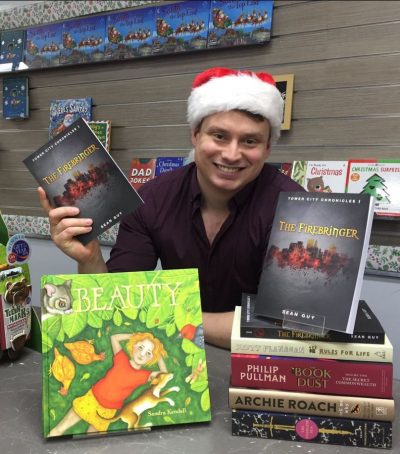 Sean Guy is a bookseller at The Bookshop Darwin, and the author of 14 novels. He spoke to Australian Self-Publisher about his experience selling his own titles at The Bookshop, shared his tips for writers wanting to get their titles into bookshops, and talked about his most recent novel, The Firebringer.

Tell us a bit about your how you came to be a writer, and your background as a bookseller.

The first novel I ever wrote was a fantasy epic called The Legend of Hathor, which was very clearly plagiarising ‘The Lord of the Rings’, though at the time I was adamant my novel was totally original. The fact that the main characters were an elf, a dwarf, a human and a wizard was beside the point—or at least that’s what 13-year-old me told my family and friends.

I’ve had the writing bug since before I could spell my own name. My parents read to me every night, and this grew into a love of storytelling which never went away. Now at the age of 25 I have completed 14 novels, as well as several plays, short films and novellas. Two of my novels are in print: Malediction: The Cursed Play and The Firebringer.

After high school I went straight into university, where I studied to be an English and history teacher, while also completing a Bachelor of Arts with a focus on creative writing. During my studies I took a part-time job at The Bookshop Darwin, the best locally owned, independent bookshop in town. I like to joke that I was in the bookshop so often I never really applied for a job, I just started serving customers one day while I was in there. After university was finished I was asked to go full-time at The Bookshop rather than teach, and I’ve never looked back.

Tell us about your latest novel, The Firebringer.

My latest novel The Firebringer is an urban fantasy thriller. It begins with a lawyer named Matthew who, in the face of a terrible tragedy, becomes conflicted about the difference between justice and revenge. His decision to try and make things right leads him into direct opposition with the largest syndicate of organised crime in the city, and a series of consequences unfold which could have devastating consequences for both Matthew and those close to him. It’s an urban fantasy, so there is also an element of the supernatural which threatens to tip the balance of power in either direction …

Working in a bookshop, I get the pleasure of meeting many of my readers, and have been so pleased by their generous feedback. I’ve been getting a lot of comparisons to Matthew Reilly and Lee Child, particularly with the action scenes and ever-building tension. I like those comparisons, and happily tell people that The Firebringer is probably what would have happened if Lee Child had written Neil Gaiman’s American Gods.

Why did you decide to self-publish the book?

To my eyes it seems the publishing industry is in a state of transition at the moment, with so many people going back to print books and indie bookshops, yet still such a high demand for ebooks. Becoming traditionally published as a new author is extremely difficult. Particularly for authors like me, who don’t have a pre-existing following from sports, politics, or being an Instagram model/influencer (this remains my backup career).

I chose to self-publish because I wanted to make the most of where I am. Having worked in a bookshop for almost eight years I have contacts in the local media, book clubs, libraries and more. I knew that my books were ready for the world, and that I could sell them, but I didn’t want to wait (potentially years) to be sifted in and out of publishing house slush piles. I’d still like to be traditionally published; my passion is for writing, not marketing. But there are a lot of avenues for self-published authors, so for the moment I’ll just keep sharing them with the world and learning as much as I can about this side of the industry!

How are book sales? Apart from the Bookshop Darwin, where else are you selling it?

I have been very happy with the sales so far. Although I’m far from making the New York Times bestseller list, each book has sold over 100 copies in the first week, and both have consistently topped our in-store bestseller lists for their genre. In fact Malediction was our top fiction last financial year—not a bad result considering it was only available for seven months of the financial year, and had to compete with Trent Dalton’s Boy Swallows Universe.

My books are available at a handful of bookshops across Australia, and quite a number of libraries. They’re also available online, although this is an area of self-publishing I’m still learning about, and the vast majority of my sales do come from within the Northern Territory.

As a bookseller handselling The Firebringer you must have spent some time crafting and honing your pitch to customers. What works (and what doesn’t work) to get customers interested in and excited about your book?

Sometimes when I see a new customer looking at The Firebringer I like to play a game: how long I can describe myself before they realise I’m the author. I might start by saying, ‘I know the author of that book. He’s local, about my age, very friendly, extremely handsome … ‘ Alas, very few people guess it’s me from that description.

All jokes aside, I find that being humble is the best approach to recommending my book. I know I may never win a Man Booker prize—to date I’ve never even been shortlisted—but I also know that my books are wildly fun to read. Like most authors, I write the types of stories I want to read. I spent 10 years plotting The Firebringer before publishing it, and have had a lot of enthusiastic comments about how the tension builds and how dynamic the characters are. Being self-published is a huge strength in this way: when I start recommending my books to a new customer there is often a regular customer already in the bookshop who is happy to shout from across the room, ‘I’ve finished that and it’s a bloody good read!’

On the flipside, what tips would you have to authors wanting to get their books stocked in a bookshop?

In today’s world bookshops have to be very selective about what they stock. Most major publishers offer sale-or-return, and self-published authors should be prepared to offer their books on consignment terms. Anything that doesn’t sell is just taking up display space, after all. I would suggest approaching local media with more gusto than you approach bookshops. As a bookseller myself, I get hundreds of requests a year to stock books which I have never heard of nor had requests for. But once I hear an author on the radio, or have some customers enquiring about it, the decision to order a handful becomes much easier. I think it’s true for most authors (other than, perhaps, Stephen King) that we need to remember writing a book is one thing, creating demand for it is an ongoing challenge. In a world where media of all kinds is freely available I never turn down an opportunity to talk to a book club, visit a school, or appear on radio.

I’m lucky in the sense that I have been writing for so long now my publishing schedule has more or less structured itself. The Firebringer is part one of a five-book series called ‘The Tower City Chronicles’. Books one to four have already been written, and just require some editing, so I’m planning to release book two (Voodoo Games) in July of 2020, with book three (Seraph) following in November. I also have plans to write a sequel to Malediction, but like everyone else I only have so much time in the day, and the new season of Stranger Things isn’t going to watch itself.